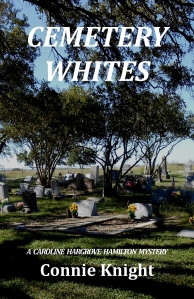 Henrietta Hargrove Harrell had driven the dirt roads of DeWitt County for her entire eighty-five years.  Professor Thomas Harrison of San Antonio had been told about Henrietta and on his trip to Yorktown he knocked on Henrietta’s door and introduced himself.  The Professor asked Henrietta to drive him to the Hargrove Family Cemetery.  He told her that seeing the graveyard would fit into some historical research of his.  Henrietta, known as Great Aunt Hettie to the Hargrove clan agreed.  But just in case some problem might crop up, Henrietta brought along Dolnny Harrell, her thirty-three year old grandson, as well as a Colt 45 in her purse.

None of the three in Henrietta’s vehicle noticed the little grey car following along behind.  When Henrietta pulled up at the cemetery the grey car parked in some brush to hide.   The Professor stated that he wanted to see some of the graves in the older section of the cemetery, specifically Thomas Watson Hargrove and his wife, Elizabeth Dennison, early settlers to the area.

Henrietta pointed out the grave where a large patch of white Irises known as Cemetery Whites grew.    The trip to the cemetery didn’t end well for the professor or Henrietta or her grandson.

Caroline Hargrove Hamilton has just relocated from Houston, Texas after the death of her husband.  Caroline has moved back to DeWitt County.  She determines while in Yorktown she will study the history of her family and perhaps be able to publish some articles of historical value.

Caroline’s cousin Janet volunteers to chauffer Caroline around and one of the first stops is the cemetery.  Henrietta is nowhere to be seen but the Professor is lying amount the Cemetery Whites.  It appears that the Professor has been shot.

So begins Caroline and Janet’s investigation into the murder as well as learning much about the family history.  The two dug up a lot of the past and learned about new connections to the family that no one had discovered previously.

This was an interesting book and I look forward to Caroline’s future adventures if the series is carried on.