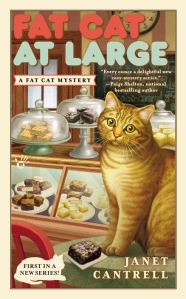 The title of this book alone grabbed me–I have a fat cat of my own! She used to be skinny or at least weighed what she should when I first adopted her—but like Quincey she had other ideas when it came to eating and when.

This is a murder mystery where Chase (who is owned by Quincey) is somehow caught up in some murders thanks to Quincey who is really good at escaping to hunt out food. Chase is always in the wrong place at the wrong time. But before I get ahead of myself Chase and Anna are co-owners of a bakery which makes dessert bars. Gabe Naughily has been trying everything to get them to sell the store to him. He has called the health department and even attempted to put rats in and around the store! Chase and Gabe have a verbal argument in the store and Chase kicks him out. Next thing you know our escape artist has escaped and made his way to Gabe’s condo where the door is conveniently slightly open so that a paw can open it. Chase finally locates Quincey who is eating some freshly made meatloaf while Gabe lies dead on the floor! Chase is now a murder suspect!

Meanwhile Quinceys vet thinks he should lose weight. Not easy since Anna sneaks him treats all day long! This vet always seems to be around when dead bodies are found –yup there are more. In desperation Chase dreams up kitty snacks–healthy kitty snacks. Thankfully Quincey approves these and will even eat his diet food as long as it is sprinkled with this delightful morsel his wonderful owner has finally found for him. Not that this is going to stop him from escaping every chance he gets!

Meanwhile the two employees of the bakery do not get along!! Thus, between trying to keep them from fighting in front of customers, and trying to prove that she is not the one murdering people-poor Chase is worn out.

There are lots of twists and turns and don’t even bother to figure out who committed those murders-it will surprise you! This could even be termed a cosy book-and now to wait for the next episodes of Quincey and his human. – Reviewed by Michele Bodemeier/Miki’s Hope