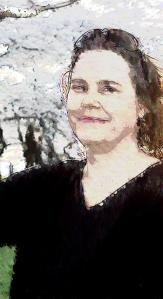 Author, poet, journalist, and blogger BV Lawson’s award-winning stories, poems and articles have appeared in dozens of national and regional publications and anthologies. A three-time Derringer Award finalist and 2012 winner for her short fiction, BV was also honored by the American Independent Writers and Maryland Writers Association for her Scott Drayco series. BV currently lives in Virginia with her husband and enjoys flying above the Chesapeake Bay in a little Cessna. Visit her website at bvlawson.com. No ticket required.

BV: I started writing stories in childhood and even won a poetry contest at the age of 10. But after a career change to music through graduate school, it wasn’t until about a decade ago that I was able to once again focus on my writing.

BV: Success can be measured in so many different ways. Certainly, having had poetry and stories published in dozens of magazines has been gratifying, as was winning a Derringer for short fiction and being a finalist for several other awards. I’m just now launching my first novel, part of a new series featuring former piano prodigy-turned FBI agent/consultant Scott Drayco, and right now, success will mean finding new readers and fans.

BV: It’s every bit as much fun as I’d expected, but it’s a lot harder. Not so much the writing itself, but the marketing, publicity, and social media that authors are expected to participate in these days.

BV: It’s about what I expected. I’ve read as much as I can about the business from experienced authors, editors, agents, and other professionals, so I think I developed realistic expectations early on. I’m not earning full-time income just yet, but I’m pleased with my progress.

BV: Not all that much, really. I consider myself a professional writer and small business owner, so I’ve developed a multi-year business plan. Part of that plan is a publishing timeline of book projects I’m working on, with publishing dates and deadlines. Writing is the main focus, but I have to factor in editing, proofing, cover artwork, and other publication tasks.

BV: I had poetry and nonfiction articles published during grad school, and in the years following, also had several short stories published. I started working on my debut novel close to a decade ago, shopped it around to a few agents at the time, but set it aside to “make a living.” Now that I’ve released it to the world, I’m planning on publishing 2-4 books each year, depending upon the specific projects.

BV: I would probably get two English degrees instead of two music degrees, even though I’m grateful for the music experiences and opportunities I had. Even keeping the music degrees, I’d have started writing part-time to full-time a lot sooner.

BV: That is quite possibly the hardest aspect of the writing business. Having a business plan with a timeline is very helpful. Creating a daily schedule (even a checklist) and sticking to it is also effective. When I’m in writing mode, I have daily word targets (even a thousand words a day will net 365,000 words a year!), and every now and then I turn off the router so that I can’t access the Internet. In general, I try to keep the promotion/social media to an hour a day.

BV: I think for any writer it’s getting that first acceptance. No matter what awards come along the way or other successes, it’s hard to beat the feeling of seeing your very first work in print.

BV: It’s difficult to pick one. Following along the previous question, it was probably that first rejection. That’s kind of a make-or-break moment for many writers—do you let it discourage you to the point you give up, or do you use it as a rallying cry to “show them” you can succeed?

BV: Every positive review, both in print or verbal, is memorable! That lets you know you’ve connected with someone, and that your vision of your work isn’t just sulking around in some writerly black hole.

BV: I approach my writing as a professional—I make sure it’s edited as best it can be, I try to make sure the covers are on par with the top echelon of published books, and I study all aspects of the publishing and writing business to continue to try and improve. Plus, the setting of my new series is unusual (the Virginia end of the Delmarva Peninsula), as is my protagonist—a former classical piano prodigy turned FBI agent/private consultant who has chromesthesia (a form of synesthesia) and plays Bach to help him puzzle through cases. But most of all, I love with I do. If you are writing merely to make money and not with passion, it usually shows.

BV: If you truly love writing, don’t give up. Write every day, and study the business to find a path that works for you.

BV: Word of mouth is always the best tool, but first you have to find readers to spread the world. Giveaways have been very helpful in that regard.

BV: Giving talks or other in-person promotion. I’m not a natural speaker, even with notes, and extemporaneity isn’t a specialty.

BV: The Washington, D.C. area is blessed with several, including One More Page in Arlington, Virginia, Mystery Loves Company in Oxford, Maryland, and Kramerbooks and Poetry & Prose in D.C.

BV: For fans of PBS and BBC Mysteries! 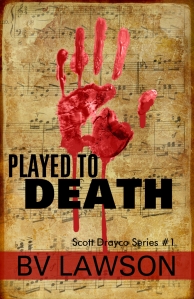 Still suffering nightmares from his last case, former FBI agent-turned crime consultant Scott Drayco considers retiring from crime solving altogether. Then a former client bequeaths Drayco a rundown Opera House in a Virginia seaside town—complete with a body inside, a mysterious “G” carved into the man’s chest. To solve the murder, Drayco must dodge the seductive wife of a town councilman, a wary sheriff, and hostility over coastal development before the tensions explode into more violence and he becomes the next victim.

BV: The ebook version is available via all ebook retailers. The trade paperback and hardcover versions are available via online retailers and special order from bookstores. I have purchase links on my website:  http://www.bvlawson.com/#!played-to-death

BV: Part of my music background was taking piano lessons at age seven on up through college. I think part of me wanted to be a concert pianist, but it just wasn’t meant to be. Perhaps that’s why I created Scott Drayco, to be my alter ego as an accomplished pianist. But I find that music still very much infuses my work, and part of the joy of the creative process is “playing” the words in my head to compose stories. I like to think I write musical fiction!