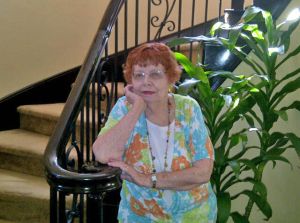 Marilyn has had so many books published, she’s lost track of the count, but it’s getting near 40. She lives in a community similar to the fictional mountain town of Bear Creek, the big difference being that Bear Creek is a thousand feet higher in the mountains.

How long have you been writing?

As long as I can remember, and that’s a long, long time. When I was about 10, I wrote a fairy tale and illustrated it. I sent if off to a publisher (with my mom’s help) and received my first rejection—a very nice one.

At what point did you reach a place where you felt successful or satisfied as a writer?

I’m not sure I’ve reached that point. The fact that I have two publishers who routinely accept my work is most satisfying—but I haven’t ever felt successful. Perhaps fulfilled is the better word, because I’m writing and others can read what I’ve written.

Is the writing life what you expected when you started out? If not, how is it different?

Though writing was something I always did, I’m not sure I had any thoughts about what “the writing life” would be. I met many authors along the way who were “famous” like Mary Higgins Clark and Jan Burke and I never thought my life would be like theirs. For me, it’s sitting down in front of the computer and writing—but also spending a lot of time promoting too. I don’t know that I ever thought I’d have to spend so much time at the promotion part.

The general public seems to think authors are relatively wealthy. Without prying too much, has your writing income lived up to expectations?

This writer is not wealthy. In fact sometimes when I see the total on my royalties I have to laugh. By the time everyone get their cut, be it Amazon or Ingram, the bookstore, the publisher, my part is very small.

Early on, so much focus is given to getting published. Since you’ve been published, how has your focus changed?

I’ve been published since 1981. But that first book really didn’t open doors for me. The editor that signed me on, left the publishing house and I had to start all over. I got many, many rejections after that.

How long did it take you to get published the first time?

This was back in the day of typewriters and carbon paper and mailing the whole manuscript off in a box with another self-addressed and stamped box inside so the manuscript could be returned. That first book was rejected close to 30 times. About every 5th time it came back, the pages would have coffee and food stains and smell like cigarette smoke. This meant I had to retype so I often rewrote too.  I don’t remember the actual time period, but I moved from one town to another and received the acceptance letter at my new place of residence.

Would you do anything differently if you had it to do over again?

With that first book I had no idea what I was supposed to do to promote it. I did set up one book signing which was successful, but that’s all. I got no guidance from the publisher about what I ought to be doing and I have no idea what happened at the publishing house’s end—if anything. Back in that time period there weren’t all the suggestions for promotions like there are now. So sure, I’d have at least set up some speaking engagements and other bookstores for signings.

Writing new material, rewriting, submitting new work, waiting, promoting published work…the list is large. How do you manage to divvy up your time to give adequate attention to all needed areas?

This is what’s going on with me at the moment. I have a new Deputy Tempe Crabtree mystery at the publisher’s right now. Usually that series comes out in the early fall, which means I’ll have edits to go over in a couple of months. I’m also writing a new one in that series. I try to work on it for at least two hours at least five days a week.

I’m reading chapters of my next Rocky Bluff P.D. to my critique group every week and then editing them.

My latest Rocky Bluff P.D. is out now and I’m in the process of a month long blog tour which takes a lot of time to promote and while that was going on I did another smaller tour with 7 other authors over a period of 14 days—also time consuming. I have several speaking engagements planned, mostly libraries and I’m scheduled to have a booth at two craft fairs this year.

What is the single most exciting thing that’s happened to you as a writer?

After being a runner-up for an Epic e-award enough times to feel like the Susan Lucci of Epic, this year I won an Epic e-award for my supernatural romance, Lingering Spirit. I was thrilled. (Epic is the organization for e-published authors and publishers.)

What is the single most disappointing thing that happened to you as a writer?

I really can’t think of anything except I wish I had more readers.

What’s the most memorable thing (good or bad) that’s happened to you while promoting your work?

When someone comes up to me or writes on a blog that they love one of my series or a particular character, tat’s a most wonderful feeling.

With more books being released each month now than ever before, what do you believe sets your work apart from the others?

My Deputy Tempe Crabtree series has a lot of Native American mysticism in it and is set in a small mountain community in the Southern Sierra—a place where no other series I know of is set. It is very much like the place where I live though I’ve changed the name to Bear Creek.

In my Rocky Bluff P.D. series, there is a cast of characters who make appearances in every book, though I usually focus on one or two for each book. I think this series could be described as almost a cozy police procedural.

If money is your goal, you should probably do something else. If you truly want to be a published author, read the kind of books you want to write, attend writers’ conferences, read books on writing, but the two most important things are to write regularly and never give up.

What do you feel is your most effective tool for promoting your published work?

Probably being visible on the Internet though blog tours, my own blog, Facebook etc. Though I really enjoy giving presentations at writers’ conferences and libraries or anywhere else I’m invited.

What area of book promotion is the most challenging to you?

Making the contacts for personal appearances—I do not like to make phone calls.

Do you have a local independent bookseller you’d like to mention?

The Rocky Bluff P.D. crime series, set in a fictional beach city between Ventura and Santa Barbara and written under the name F. M. Meredith

An Axe to Grind 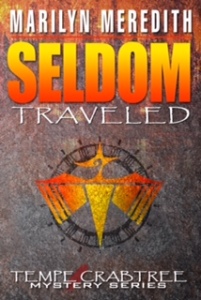 (the next in the series will be available this fall, called Raging Water

In No Bells, Officer Gordon Butler has finally found the love he’s been seeking for a long time, but there’s one big problem, she’s the major suspect in a murder case.

Amazon or Barnes and Noble. It is with Ingram so can be ordered by an independent bookstore.

3 thoughts on “Getting to know Marilyn Meredith”