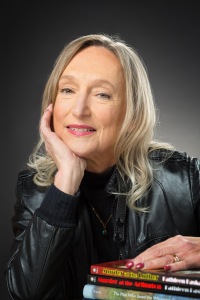 Writing’s tough. It’s fun and gratifying, but still tough. I’ve learned a lot of lessons along the way. The most important one is: believe in your writing and never give up.

Run Dog Run was my first attempt at writing fiction. I wanted to write a story that was not only engaging, but made people think about animal-rights issues—a cause I am passionate about. I had to rewrite the manuscript several times. My first draft was too heavy-handed and I realized I preached and editorialized too much. I revised it again then and set it aside. In the meantime, I began writing my Sydney Lockhart mystery series. I also love writing humor and this series offered a nice balance, since Run Dog Run was serious in nature. But I always had faith the book would sell, so I touched it up once more and I submitted it to Black Opal Books. They offered me a contract.

The idea for that story started forming while I was a member of Wildlife Rescue, Inc. in Austin, Texas. I helped rehab and raise orphaned wildlife there. I wanted to write a series that made readers aware of animal care and animal-rights issues. Run Dog Run takes place in the world of greyhound racing.

Here’s a short excerpt and synopsis.

She’d been foolish and gone off alone, now she might have to pay the ultimate price…

The rocks along the bottom of the creek bed seemed to disappear. Kate felt the ropy, gnarl of tree roots instead.

The cedar break. She was approaching the road and soon the water would pass through the culvert. She knew that she would not make it through the narrow tunnel alive. Her lungs screamed for air. With one final attempt, she grabbed hold of a long cedar root growing along the side of the creek bank and hung on. Miraculously, it held. She wedged her foot under the tangled growth and anchored herself against the current. Inching her way upward, she thrust her head above water and gulped for air. But debris in the current slapped her in the face, and leaves and twigs filled her mouth, choking her. Dizziness overcame her ability to think—exhaustion prevented her from pulling herself higher.

She must not give in. Fighting unconsciousness, Kate inched her way up a little farther, and at last was able to take a clear breath. Her right arm hung loosely by her side, the back of the shaft had broken off in the tumble through the current, but the arrow was lodged in her arm. Numb from cold water and exhaustion, she lay on the bank as the water swept over her, and then, as quickly as it had arrived, the flow subsided and the current slowed. If she could hang on a few moments longer, survival looked promising. As thoughts of hope entered her mind, Kate feared that her pursuer might not have given up the chase. Perfect, Kate Caraway, just perfect. You screwed up again, she chided herself as the lights went out.

to a screeching halt when she shoots a poacher and is forced to leave the country. Animal rights activist Kate Caraway travels to a friend’s ranch in Texas for a much-needed rest. But before she has a chance to unpack, her friend’s daughter pleads for Kate’s assistance. The young woman has become entangled in the ugly world of greyhound abuse and believes Kate is the only one with the experience and tenacity to expose the crime and find out who is responsible. On the case for only a few hours, Kate discovers a body, complicating the investigation by adding murder to the puzzle. Now, she’s in a race against time to find the killer before she becomes the next victim.

If you’d like to read my formal bio, log-on to my website. But here’s a more telling bit about who I am:

I’m a Texas gal. Except for an eighteen-month hiatus when I moved to New York City after college, I lived in Texas continuously for fifty years. Since then Texas has been hit and miss—a little hit, but a hell of a lot of miss. There was a time when I thought I would happily die in Austin, Texas. But things and weather—especially weather—changed that. Now I spend most of the year on Fidalgo Island in Washington State with a view of the bay and the mountains. When I get homesick, my husband and I plug in the iPhone to Pandora and select Willie—as in Nelson, (I hope you don’t have to ask). Soon we are dancing the two-step, imagining we are at our favorite honky-tonk in Tokyo, Texas where the mayor is believed to be a dog. Who wouldn’t miss that?

Run Dog Run is available in bookstores, through Black Opal Books, and Amazon.

One final note: a portion of the proceeds from book sales will be donated to The Greyhound Project, Inc.

3 thoughts on “Never Give Up by Kathleen Kaska”