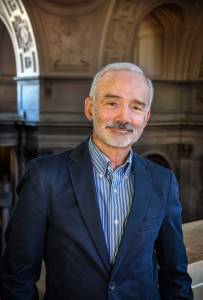 I write murder mysteries in which sex and violence are minimal, and an amateur sleuth solves the crime through reasoning.. After writing four of them, I’ve learned that even in the cozy and traditional genres, one can address great ideas and profound evils. Hence the theme of the series: Dark Mural, Dark Exhibit, Dark Picasso, and now Dark  Portrait.

For the fourth book in the series, my amateur sleuth, Nicole Tang Noonan, returns to her hometown, San Francisco, from the rural campus in Ohio where she teaches art history. She finds it much different from the city in which she grew up. The explosive growth of tech companies has gentrified formerly working-class neighborhoods, resulting in homelessness, and a host of other social ills.

When she notices someone is posting videos of rococo portraits set afire, she cannot help seeing the parallel between twenty-first-century San Francisco and France on the eve of the French Revolution. Then she finds a link between the portraits and the murder and of a tech executive.

The murder mystery is one of those forms in which readers don’t want to know in advance what the hero discovers. “Don’t give away the ending” is a rule universally respected by writers, fans and critics. Also, “don’t give away what the sleuth discovers halfway through!”

So, promoting a murder mystery is tricky. I want to give potential readers an idea of what they’re in for 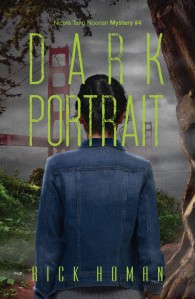 without giving anything away. I rely on a section of my blog, “Nicole’s World,” to give readers a preview of what I’m researching for the next book. It can be seen at www.RickHoman.com.

I send out a newsletter, “Plans to Publish,” for people who want to share my writing and publishing process. I share selectively on social media everyday details of my life, because I think people like to know who they’re buying from. And I am learning how to advertise on Amazon.

Mostly I rely on the ultimate promotional strategy: write another book. I’ve heard several industry professionals say, “Nothing sells a book like another book.”

Rick Homan is the author of the Nicole Tang Noonan mysteries available at Amazon.com. He was a professor of theater arts for thirty years and has performed as an actor and guitarist. Rick lives in San Francisco with his wife, Ann.

One thought on “Dark Portrait by Rick Homan”