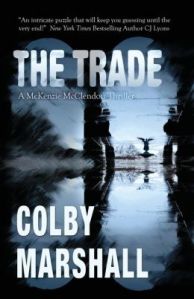 McKenzie McClendon is a journalist with The Herald.  After breaking a huge story the previous year of an assassination plot, McKenzie is fighting to stay at the top and prove that she has more than one story in her.

New York City is being plagued by a murderer dubbed The Cradle Robber since he is slicing up pregnant women and leaving them to die once he has removed their babies.  The Cradle Robber is the story McKenzie is currently chasing.

Jonas Cleary is McKenzie’s high school sweetheart.  Jonas contacts McKenzie as he believes his wife was one of The Cradle Robber’s first victims.  The police think Jonas is just grasping at straws since his wife was not pregnant at the time of her death.  However she had their infant son with her when she was murdered and his body was never recovered.  Jonas believes that his son was sold on the black market.  Thus begins Jonas and McKenzie’s investigation into the murders and the possibility that the babies are being sold.

The Trade is a fast paced thriller that the reader will not want to put down.  This is Colby Marshall’s second book in her McKenzie McClendon series.  I will be purchasing the first book, Chain of Command, and look forward to other additions to this series.