FLYING INTO THE CLOUDS WITHOUT A COMPASS  (by Nancy Means Wright)

Since 1996 when my first mystery novel came out from St. Martin’s Press, I’ve been with traditional publishers. Patti Nunn was my security blanket through her wonderful BreakThrough Promotions, sending out flyers and getting me on radio gigs (I loved curling up in a chair and chatting about books).  I marketed a number of adult mysteries  this way, and two middle grade novels, which won an Agatha Award and Agatha nomination. I was content to make my advance each time and to remain a midlist author.

Then midlist writers became a thing of the past, and hundreds of new writers appeared, selling or giving away their books online. I suddenly wanted to be part of all this, and in control! So I turned my backlist into e-books, and an in-progress adult mystery, Broken Strings, into a partially self-published book.  I say ‘partially,’ because I panicked at the thought of doing everything from manuscript conversion, to e-and-print book.

Cruising the web one day, I discovered Great Minds Think Aloud Publishing. I envisioned folks shouting out their books in subways, groceries, and coffeehouses! I discovered that publisher Kitty Bullard would convert my manuscript into an e-book with frequent chances to offer it free. She included artwork, a blog tour, and a print book through Create Space. She didn’t offer any editing, but she put me in touch with a professional free-lance editor who charged a reasonable rate

My sleuth is a failed actress named Fay, who is shocked to find a puppeteer friend dead of poisoned yew. She’s an offbeat character from my St. Martin’s series, who will carry on the troupe and track down the villains. I gave her three lively foster kids, a kooky psychic friend, and a shy but attractive male neighbor to help with the puppets. The editor liked the book, which I call a “dark cozy,” and held me hostage until I “got it right.”

The finished novel looked great, but had none of my usual reviews from Publishers Weekly, Kirkus, Booklist, who only deal with traditional publishers. I tried to buy a PW review (for $140), but, for some reason, the online application process kept rejecting me. (Did it know I wasn’t wholly self-published?). I found a few review sources through a Step-by-Step self-publishing list, and spent hours writing blogs and answering questionnaires.

A Vermont bookstore invited me to do a book launch, and I asked my Very Merry Theatre son to direct A Tale of Two Lovers—my one act riff on the fairy tale Sleeping Beauty, which figures in my book. Working a marionette is truly an art, so my puppeteer spouse taught the six players only the basics. But the date the bookstore gave us turned out to be the eve of an eighth-grade graduation for three of the actors. They thought they could act and graduate the same day, but their parents disagreed!  So we’ve had to reschedule the event until fall.

And now I must expand the play into an hour-long production, my son insists, with song lyrics and parts for fifteen players.  And more string, rod, and hand puppets to create, of course.

Oh dear. It seems the novel I thought would take less marketing time has ballooned into a major flight!  I only hope I don’t end like Amelia Earhart who tried to

circumnavigate the globe, but finally sank into the Pacific Ocean.

But a writer has to take risks, right? So here we go: sailing into the clouds… And hoping for a happy landing!

Nancy Means Wright has published 18 books, including 6 contemporary mysteries from St Martin’s Press and two historical novels featuring 18th-century Mary Wollstonecraft (Perseverance Press).  Her two most recent books are the mystery Broken Strings (GMTA publishing) and Walking into the Wild, an historical novel for tweens (LLDreamspell).  Her children’s mysteries have received an Agatha Award and Agatha nomination. Nancy lives in Middlebury with her spouse and two Maine Coon cats.

Hallie is an author I discovered not too long ago. I love that she’s a suspense writer, and good at it. Her books don’t just give you a mystery to solve, they provoke feelings along the way, just like the movie she mentions below:

Hallie: Fiction? For about fifteen years.  I started to get serious when my kids moved out and I finally had that proverbial “room of one’s own.”

Hallie: A famous writer once told me that being a writer is like flying — there’s always someone in a class ahead of you. So I try to grab every milestone and embrace it as “success,” drink a toast, and savor the moment. From sitting down that first day to write, to finishing my first manuscript, to getting an agent, to holding my first published book, to finishing my 12th book (three weeks ago)… Celebrate! I recommend it.

Hallie: When we I sold “Never Tell a Lie” to the Lifetime Movie Network, my daughter asked me if we were rich yet. I told her no — it was a car, not a house.

Hallie: It’s too darned hard and takes too darned long to write a book, so I’m always writing about themes and characters that I really really care about.

Hallie: Two years to get the manuscript ready to send to agents; two MORE years to find an agent and publisher, revising endlessly along the way; another year to see it in print. Five in all.

Hallie: Deadlines help. I keep a spreadsheet with word count plotted against a calendar, and ever few weeks I update it to see if I have to pour on the gas or if I can afford to ease up a bit.

Hallie: The response to “Never Tell a Lie” was a fantastic ride. Lots of foreign sales and a sale to the Lifetime Movie Network (they made “And Baby Will Fall”). Then, to ice the cake, it was nominated for the Mary Higgins Clark Award.

Hallie: You’ll need dogged determination and intestinal fortitude to stick with it, through first draft and endless revisions, until your words are polished to lapidary perfection. It wouldn’t hurt, either, to have the hide of a rhinoceros to withstand the inevitable rejections. Talent being equal, what separates many a published mystery writer from an unpublished one is sheer stamina and blind luck. Only gluttons for punishment need apply.

Hallie: I combine teaching with writing. I love going to groups and conferences and teaching ABOUT writing, meeting writers, helping other writers get a leg up — and along the way getting my name out there and building readership.

Hallie: Writing the dreaded synopsis. AKA book pitch. Feels like it takes out all the complexity and nuance and leaves behind raw sales pitch. Worst thing is, it’s so hard.

Hallie: You would ask…

Reformed hacker Diana Highsmith is a recluse who works and lives online. She has not ventured beyond her home for over a year – not since that fateful climbing vacation took Daniel’s life.But when her’s sister disappears, Diana is forced to do what seems impossible: brave the outside world. By assuming the identity of her alter-ego, an avatar who is as fearless as Diana herself once was, she finds the courage to set out. 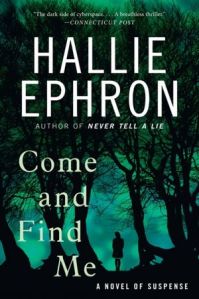 Hallie: I’m suspense writer, and I’m always going for what I call the “lightbulb in the glass of milk” moment. Think of the scene in Alfred Hitchcock’s Suspicion. The Joan Fontaine character believes that her charming, wastrel husband, played by Cary Grant, is an embezzler and a murderer. As Grant mounts the stairs, the camera zooms in on what he’s carrying: a tray with his wife’s nightly glass of warm milk. That milk seems to glow, and we’re wondering: Is it poison?

Hitchcock placed a light bulb in that glass to give it an eerie glow, and I’m always trying to do the literary equivalent, building dramatic tension by making the ordinary seem menacing.

Don’t you just love talking with some of our favorite authors? What would you ask Hallie if she were here?